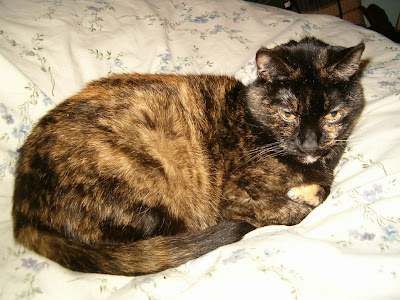 Please send all your purrs and prayers for our 18 year old Chica - we had a rough night last night and I didn't think she was going to make it. She has chronic renal failure and last night she began vomiting watery foam, drooling, licking her lips. She was crying and growling and very uncomfortable. Her paws were cold and her breathing was shallow.

We called the ER for pets and they felt she was dying and said she may not make the night so we opted to keep her home with us giving her homeopathic remedies for kidney toxicity and nausea. I slept on the sofa near her. She refused to let me hold her and finally found a small spot to curl up in.

I got up during the night and she had gotten inside her basket and fell asleep. She was awake and aware this morning and so far has not vomited. She keeps drinking water and has peed. She even purred for me.

She will go to the vet and hopefully get some SubQ fluids to make her more comfortable. She had been diagnosed three years ago but had been doing well. This episode was quite sudden and severe. Has anyone else had experience with CRF? I had thought her disease progression would be slower than this. Thanks for your help.

Update Fri 9/18
We finally got IV subq fluids in Chica - it went easier than I thought. She is quite feisty even for her age and does not like to be messed with! She is wiped out and sleeping but ate a little and seemed more active and alert. We have a vet appointment on Tues to give her a complete check up and see what we can be doing to help her be more comfortable. The vet was out sick today so we had to make other arrangements to get her fluids. I guess I will be giving her the fluids myself which I have done before with other cats but not her. Thanks again for all your support and purrs! You guys are great.
Posted by wildcatwoods at 12:12 PM

Purring for Miss Chica in hopes that she will feel better soon.

We're definitely sending purrs for Chica! We don't have any experience with CRF, but we are purring and hoping for the best for you and your sweet girl.

We are purraying effurything will be ok. She is a fighter and will stick around!!! We are sending TURBO PURRAYERS over to her right now!!!

I have had only a little experience with CRF, but I'm fairly sure that CRF kitties are supposed to get sub-q's frequently.

Maybe she's having an acute episode? I read about that and clipped just a small piece here:
Accute Renal Failure is usually treated with IV fluids and other medications at the vet's and, although it is hard to treat, if the cat survives the initial crisis, he/she can often regain much or sometimes all of his/her normal kidney function. However, sometimes cats who experience ARF will have some residual damage, and will be left with CRF.

This is a pretty good web site:
http://www.felinecrf.org/

I hope Chica pulls through. We'll be praying for her. Please keep us posted.

p.s. I read Chica's story and in a lot of ways she reminds me of Lucy.

We're purring for Chica. Mom has had CRF kitties and they all had fluids pretty regularly after they reached a certain point.

Sorry I don't have any experience of this. But please know that you and Chica are in our thoughts, prayers and puurrs!

Chica, we hope that you feel better today and are able to stay with your family longer.

Sending purrs and prayers for Chica and all of you,

We are purring for Chica and we hope this is an isolated incident and she feels better soon. Bogart, the one that came before us, had CRF...he lived with it for a number of years before having to have any kind of real treatment. For the last year of his life, mom gave him sub-qs every other day and then every day in order to keep him hydrated and feeling good. That usually is standard treatment for a CRF kitty. Lucy's mom gave you a good website to check out...also check out www.felinecrf.com...

We are keeping PURRayers said and paws crossed. We know how horrible an experience this is for you and for your sweet baby.

Poor Chica! I know that when a cat doesn't want to be touched that they are feeling very poorly indeed. It sounds like she improved somewhat overnight, though.

The only experience I have with renal failure in a cat is with my son's little girl kitty who was only 4 years old -- but she had a genetic defect and she went from being well to not in less than a week. She was helped to the Bridge.

We are sending mega-purrrrrrrrrrrrrrrs to Miss Chica and hope she will recover from this episode and continue on for much much longer!! Hugs to da beans as well.

Purrs and hugs,
The Kitty Krew

Thanks for all your support and suggestions. Chica is doing better today but has not eaten. I have tried giving her fluids myself (and have given them to other kitties) but she fights us tooth and nail I am hoping that she will accept it now that she is not feeling as well.

We will certainly think our most positive thoughts and send our fondest purrs for poor Chica.

oh no. i am so sorry to hear this. when you wrote that she 'purred for you' i about lost it. it tares at the heart. please be strong for your sweetheart. comfort her and hope. hope can change all things. much hugs and purrs.
-Us4 Gatos

Many many many puuurrrrrsss prrrayyeerrrsss and vibes and more vibes for you Chica.... please please drink and eat for meowmy.... she gets worried...
Feel better honey ~ purrs and headbutts
Lucky, Bugsy and Hope

We're purring and purraying lots for Chica. I (Gypsy) have CRF, but I just eat a special diet to keep it in check at the moment.

Purrs from Maine! We hope Chica has eaten by now and gets better. I'll send out some Reiki healing through the universe to Chica...Co9T

We're happy to hear Chica is doing better! We'll continue to purr for her.

s good to hear chica is feeling more comfortable now. we is gonna crank up the purr machine to high so chica can feel even better.

Many healing purrs going out to Chica ...

We are purring for Chica. We were reading Chica's story and my mom is amazed at how much Chica was like my mom's first cat Morgan. Mom and Morgan used to play hide and seek together the same way! Chica is very special.

I am purr-aying fro Chica
I know how hard this must be for you and Chica - how sad and stressful for all of you.