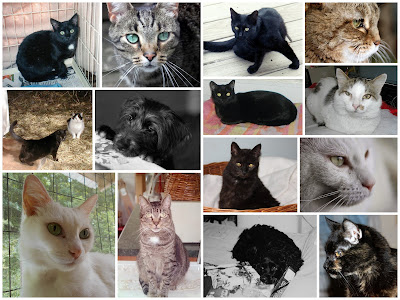 On our second annual Rainbow Bridge Remembrance Day we want to honor  those beloved animals who came into our lives, changed them and left indelible marks on our souls for however short or long they were with us.  Thank you to Deb Barnes of Zee and Zoey blog fame, for hosting this special day. 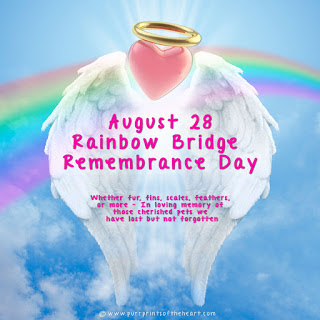 Because this is such a hard post to write, I am reposting the copy from last year and adding a few more names to it.  I have lost so many cats (and dogs) over the years with more to go as they age.  This, to me, is the only drawback of rescuing animals. But with each heartache comes a special gift or lesson that each animal has for us.


I have a few memories of my mother's dog, Micky, a purebred cocker spaniel who passed when I was a toddler.  My mother told me so many stories of him that I feel like I did know him.  She was so worried about bringing me home after having Micky as the only dog/child for so long but Micky took me in like his own.  He would sit outside my room and howl when Mom let me cry myself to sleep.  I fed him off my plate from my high chair so he got lots of goodies.  I would lay with my head on him, sukcing my thumb and rubbing his fur.  Micky developed cancer in his final years.  His gift to me was his unconditional love.


I had one dog Bunny, a cocker/poodle/terrier mix, when I was a teenager who died at age 11 of cancer.  She was extremely intelligent, funny and energetic.  She taught herself to alert me of any new sounds in the house if I was home alone since I was hearing impaired.  She left me her gift of exuberant joy.

My first cat didn't come into my life until Chica, who found me in Florida in 1991.  Maybe because she was my first, she was my heart and soul cat.  Yoko join us two years later and then in 1998 we moved to the North Carolina mountains and my work with feral cats began.

I worked with a local vet to trap, neuter and release the ferals living in a colony in the woods behind our farmhouse.  So many were not even named, their lives with us were so brief, as it often is with ferals. Bob and Leroy just vanished on different days when they were both about six months old.  I have to think that some wild animal got them.  The ones that survived and thrived became a part of our lives and as they aged we took them into our home.

Momma Kitty was the first to leave us in 2003 on my birthday.  She had been ill during a really hard winter but had eluded my attempts to catch her.  When I did, we took her to the vet and he said she was just days away from dying.  He body was filled with tumors.  We let her go surrounded by our love. She left behind her nurturing peaceful nature.


After two hurricanes blew through our town in early fall 2004, I noticed Big Guy, the head feral mancat was getting weaker as the days went by.  He lay limp on the second level of the feral shelter we built, unable to move.  I rushed him to the vet but there was nothing we could do - his huge benevolent heart was giving out.  He died peacefully in my arms, the only time I was ever able to hold him.  Big Guy taught me compassion and benevolence, watching him rule over his beloved colony.


Two weeks later our most recent addition Clarence, a regal stray who wandered into our yard, not part of the colony, died in his sleep under the bedroom chair with a faint glimmer of a smile on his face.  He lived with us just 18 months and had been ill for the last six.  At least he knew our love  for a short time. He showed us how to live with dignity no matter what our circumstances.


Nick, one of the few ferals still outside at this point, became ill so we took him inside and nursed him.  He had lymphoma and  left us in 2006. Nick's gift to us was his eternal goofiness and love of play. Manny, Mamacita's son, followed him a few months into 2007 after a vet badly handled a urinary blockage.  He was only two years old.  This was getting harder to lose so many but we did have a few years of health and longevity.

My main man Joey left us for the Bridge in 2012 suffering from cancer.  He was the one cat welcome committee to all newcomers. He was a gentle boy who loved everyone. Everything was a wonderfully fun  to him. He left us his zest for life.


Then we come to the hardest loss - my dear Chica who lived to be 22 years old.  I didn't want her to leave and I guess she didn't want to either.  She passed from heart issues on my birthday in March of 2013.  She was a part of me like no other cat could ever be.  We went through so much together.  A piece of me died with her but I know she lives on in my heart.  She taught me to speak up for what I want.  She never lacked for anything - she just took it.  She made me smile.


Yoko was the quiet one and her favorite was my husband. She was our Buddha cat - doing everything very slowly, methodically and focused.  She ate deliberately, savoring and chewing every bite.  She even made biscuits slowly, with her eyes closed in a blissed out state of contentment. We lost her to oral cancer in December of 2013.  Being with her, taught us patience - to sit, and not rush around, to be still and savor each moment.


Lily was another loss that was almost too hard to bear.  She was our mother figure - giving birth to all the white cats before we could trap her.  Even while living in the house with us she was forever caring for us - sitting with us when we were not well, ever on the alert to noises and the goings on of the other cats.  We lost her at age ten to oral cancer in April of 2015.  Her gift was her love and caring.


My sweet Ivy left this world suddenly on July 27, 2015 at age 17 after throwing a blood clot in her hind leg.  I still hear her funny quack and look for her in the TV console, expecting her to be napping on the receiver snug and warm. She was funny, silly and loved to play.  Everything about her was comical.  She left a big hole in our hearts.  Her gift was the laughter and smiles she brought to us all.


Shortly after Ivy left us, Minnie was diagnosed with late stage renal failure and succumbed in October 2015.  She was a curious intelligent and mischievous cat, always getting into something.  She loved boxes or any tiny space she could get into for that matter. . She loved to play and did everything with such abandon.  Minnie gave us the gift of living in the now, this moment to the fullest.  She was chock full of joie de vivre and it spilled over into our lives


In November of 2015 I heard a knock on my door.  It was a neighbor asking me if I had seen her cat Jack.  He vanished without a trace and has not been seen since.  Even though he was not our cat, he spent so many days in our yard with us, entertaining us, hunting and being his silly self.   Jack, as a cat, did swagger through a fun, exciting, adventure filled life. I often feel his spirit with me as I hike his woods.  He left us his love of adventure.


And finally, our Georgie, age eight,  was the last to go to the Rainbow Bridge in December 2015 from complications from hepatic lipidosis. She had developed diabetes in late fall of 2014.  The vets treating her were never able to find the correct insulin dose to keep her stable.  She was in the hospital more than out for the year she lived after the diagnosis.  Even with all this turmoil in her life Georgie's gift to us was her patience, sweetness and trusting nature.  She calmly let me do all the diabetic procedures to her without a fuss.  Her vets loved her for always letting them do their job.  She was like water, bending and flowing with life's daily movements, always unflappable, unperturbed.

We miss you all dear ones and know that you will be there at the Rainbow Bridge to greet us when we arrive.  Until then, we will see you in our dreams.