A year ago today  Ivy left this world after having thrown a blood clot.  It is hard to believe so much time has gone by without her.


Lately I have been seeing black and white cats in my peripheral vision while at home.  I am assuming it is the part of or all of the quartet that left us last year - Minnie Ivy, Georgie and Lily.  I just see a shape and color but no details. 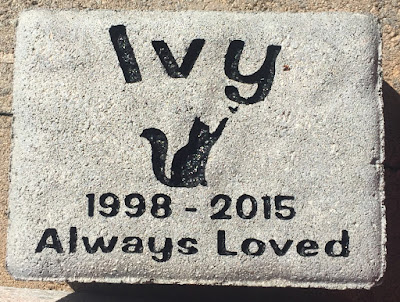 Knowing the anniversary of her passing would be coming up, I finally ordered her grave stone from Etsy.  It is smaller than I thought it would be but then so was she. Small but packed full of joie de vivre, a booming voice and abundant energy.


I was just talking about her the other day to a new employee of the pet food store I frequent.  Knowing she is a feral cat caretaker I was explaining how I have a feral cat sanctuary.  She was surprised to hear that they were now all indoor only.  I told her about Ivy, how wild she was outside so much so I could not even touch her. I told her how I left Ivy outside one last summer in 2005  because I was worried she would not adjust to life indoors. Even after living seven years in a feral cat colony she settled right in and loved being a house cat and lap cat.  Ivy was also full of contradictions!

She lived a long and amazing life for a feral cat, surviving illness (she was FIV), being shot with a BB gun (the BB was still in her leg),  hurricanes, blizzards and the loss of her fellow ferals as they passed on during her first seven years.  After we took her in, she handled moving to a new home three years later with her usual resilience. Ivy flowed with the ups and downs of life, taking it all in stride. (Read about her life here.)


I spent so much of her first years worrying about her living outdoors.  That worry bonded me to her before I could even hold her.  Once inside she was my shadow - with me everywhere I went , either beside me or on my lap. Ivy trusted me implicitly. She cracked us up daily because she had so many endearing quirks and funny habits - licking butter off my finger at breakfast, napping in the TV console, playing catch with socks on the bed, waking me up in the morning by quacking next to my face, letting me dress her up. Ivy was a unique personality, one of a kind.  We miss her every day!