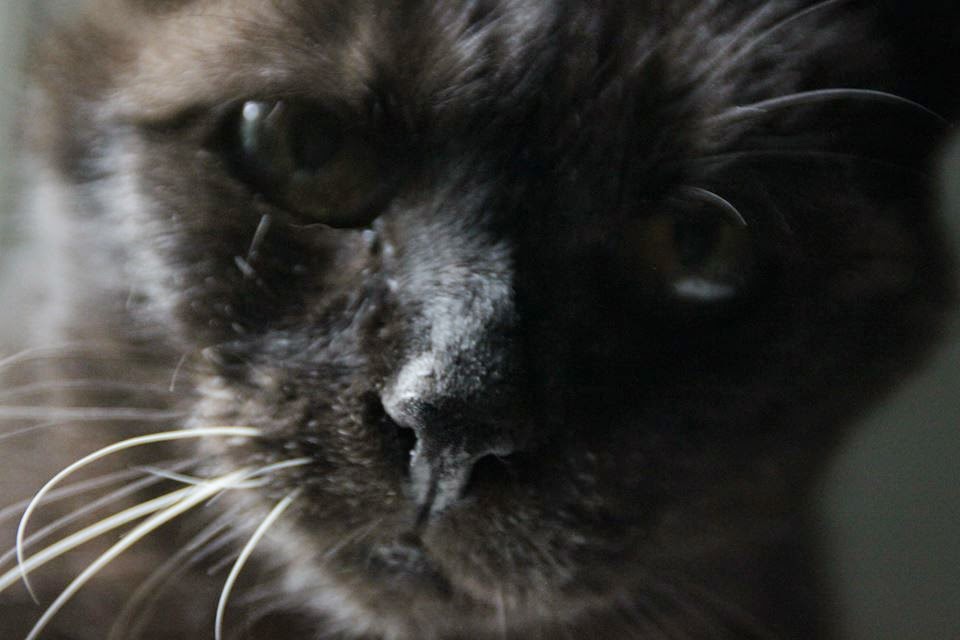 First off, thank you all for remembering sweet Ivy's Gotcha Day.  Mom completely forgot and wondered why all the new comments were on her post from last week.

Mom has had the 'blahs' for a bit now.  Nothing major, just feeling down.  Not posting or doing much Facebook even.  She has not been very motivated in her photography either - so no new photos of us.  Boo to her.  We have a mind to fire her.


Since we don't have any great pics of us for our post, we are going to tell you the story of our brush with Hurricanes Ivan and Frances back in 2004. It happened 10 years ago on September 5.  At the time we lived in a high valley in the mountains with rivers and creek all around us. There were still three of us feral cats living outdoors then - me, (Ivy), Big Guy and Nick.  We had a wood shelter Pop made from an old kitchen counter with an covered upper level with one side open toward the house as well as an indoor lower level.  Mom often wondered what she would do if we ever had a bad hurricane come through while we lived outside and sure enough, it happened that year.


We had a wet summer with a smaller hurricane coming through with lots of rain.  Then Hurricane Frances descended on us a week later, at night, dropping 18 to 20 inches more of rain.  We were not expecting this much rain and everything was super saturated but otherwise fine.  Us cats rode it out in the shelter on the upper level. We were very scared but stayed where we were, just watching the blowing rain and wind.  Mom kept and eye on us with her search light, shining on us from the bedroom window all through the night. It was wet and soggy the next day but nothing was damaged, even though the river went up quite a bit.

Then Hurricane Ivan was expected to take the same path one week later.  This was not good.   The beans owned a corner lot with the river  just on the other side of the road running next to us. Many years ago they had a horrific flood back in the 1940's and the church on this side street facing the river was carried quite a ways downstream.  All three of us cats went about our daily routine but Mom was really worried about us this time as the creek ran  behind our shelter on the other side of the trees and at a 90 degree angle to that creek was a river just across the road.  We could be in serious trouble.


All three of us were in the shelter and Mom and Pop had some of the older cats  inside with them. No one was told to evacuate since the storm wasn't due until the next day.  Darkness fell and the rain began that night..  Power went out which made it difficult to see where the water was.  Mom got out the search light and kept checking on us and the river.  This time the river went well over the banks and into our yard, covering the bridge out to the main road.  The fire trucks were on the other side of the bridge directing traffic away from our neighborhood and telling us to stay put as it was too late now to leave.


The main brunt of this last hurricane was the rain even though it was somewhat windy. Pop had a rain gauge on the back deck but it blew off sometime during the night - we had already gotten over 10 inches of rain at that point!  The beans stayed up all night keeping an eye on the river, making sure the water didn't come into the house.  Mom began chanting a Sanskrit mantra with the intent to keep all of us cats and humans safe.  She chanted non stop all night long.

Our neighbor Dot was an elderly woman who lived alone with her toy poodle Peaches.  Dot's house was just a few feet from the river across the road and we could see the water was past her house.  She had called for help but no one could safely get to her.  The water was up to her knees inside the house. She was told to stay put and help would get to her when it was light out. What a scary night she had but she was a tough lady! Another neighbor Peel who rescued cats, had a shop next to Dot.  Mom was also keeping an eye on her place as the cats lived in the shop.  It was a long frightening night for all of us.

The wind howled and the rain just kept pouring down.. At day break, as the rain let up,  Mom and Pop put on their rain gear and came out to see how things were looking.  The river was going down a bit.  Dot had been rescued with her dog but the house was a mess.  Peel's shop was built a few feet off the ground and that saved it. The river never came into her place but her garden was ruined and picket fences were down with all sorts of debris carried by the river in her yard.  Mom's car had been parked in front of the house and had water inside, up to the seats.  All our neighbors were out inspecting the damage and  one even caught a trout with his bare hands in the water on the road from the river.


Mom waded out to us and miraculously the creek behind the cat shelter had overflowed away from us into the yard behind.  Our yard was full of water but our little shelter was like an island, high and dry and all of us OK!  Mom was so relieved and overjoyed to see us when she came out with a bowl of kibble.  The beans  lost their garden and lots of bunny rabbits drowned with the water rising so high and so fast.  We didn't see rabbits in our yard for years after.


So many hiking trials in the mountains were washed away and were closed off for months after to be repaired.  We lived a few miles from Linville Falls and in normal days the falls are pretty impressive.  After the storms, the water roared over the falls!!!  Even though Mom loves the water in all forms, she never, I mean never wanted to have water near or on our property again after going through this.  Anybody else have a bad storm story to share?


Posted by wildcatwoods at 9:02 PM 18 comments: Links to this post