Today is National Straw Hat Day - the day when you put your felt hats away and take out you cool and comfy straw hats for the summer season. 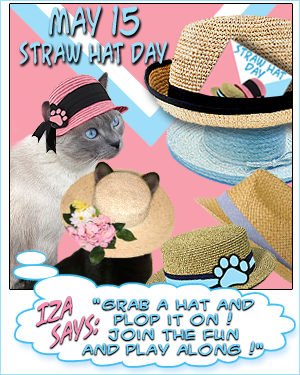 None of us are real big on wearing clothes, props or hats so Mom did her best to dress us in straw hats.  Tabitha and Lily were willing to cooperate but Two Spot just hid under his hat!

Ever wonder how certain hat sayings came into being - well here are the origins of some:


Hold On To Your Hat(s)
A warning that some excitement or danger is imminent. When riding horseback or in an open-air early automobile, the exclamation 'hold on to your hat' when the horse broke into a gallop or the car took-off was certainly literal.

Mad As A Hatter
Demented, go mad. Hat-makers use to inhale fumes from the mercury that was part of the process of making felt hats. Not recognizing the violent twitching and derangement as symptoms of a brain disorder, people made fun of affected hat-makers, often treating them as drunkards. In the U.S., the condition was called the 'Danbury Shakes,' as Danbury, Connecticut was a hat-making center. Mercury is no longer used in the felting process and hat-making is safe.

At the Drop of a Hat
Fast. Dropping a hat, can be a way in which a race can start, instead of a starting gun for example. Also, a hat is an apparel item that can easily become dislodged from its wearer. Anyone who wears hats regularly has experienced the quickness by which a hat can fly off your head.

Bee In Your Bonnet
An indication of agitation or an idea that you cannot let go of and just have to express. (A real bee in one's bonnet certainly precipitates expression.) (from the Hat Trivia page)

So grab a straw hat and have a great day today!

P.S. Mom apologizes for not getting by to visit - she has been sick since Straw Hat Day.  Hopefully tomorrow she will feel up to blogging.
Posted by wildcatwoods at 12:00 AM

You kitties had to wear REAL straw hats?! I'm so glad we don't do this day - my human has a straw, kitty-sized hat and it makes me unhappy when she tries to put it on me.

Those are some impressive straw hats! We wouldn't let anything like that near us.

We'd never heard of hat makers being demented from mercury fumes - but then we don't go much on wearing hats!
Luv (hatless) Hannah and Lucy xx xx

Well we think you all deserve extra treats for having to wear "real" hats and not photoshopped ones!

Y'all sure look terrific! Happy Straw Hat Day from the Cat in the Hat!

What luverly Diva Straw hat poses with real hats!!! what pawsome patients you has and you all look purrific, even if you use the hat for hiding behind.

About Buddy the cat in need of help... Got an update. he is going to the vet tomorrow and the office call will be free(?) according to his owner Charlette, but the x-ray is 350 dollars. Wish I had some xtra funds to help, but my credit cards are maxed out right now....

Thanks for helping if you can. Will keep you posted... (Will launch an auction needed...) purrz, Katie Kat.

I think you look wonderful in your hats. x

Well, we hafta admit, you did a great job modeling that real straw hat!

We only allowed our mom to deck us out in virtual hats. The last time she tried a party hat, and it was on Mauricio. That did not turn out well. We think two spot had the right idea. XO, Lily Olivia, Mauricio, Misty May, Giulietta, Fiona, Astrid, Lisbeth and Calista Jo

Oooo Tabitha you look BOOOOTIFUL in your hat! *swoon*

Thank you guys SO much for your kind thoughts and purrs while I wasn't well, I'm so happy to say I'm home now!

You all look great in your straw hats. What a good idea to hide under it. That is what we would have done. Hope all of you have a great day.

You all sure are great sports, letting Mom put a REAL hat on you. We made our dad use Photoshop for ours. Hee hee!