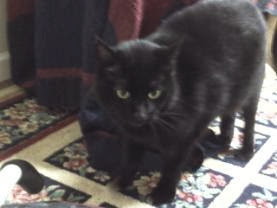 This is not about us but a great story about a rescued feral cat!   Back in April, Brian from Brian's Home blog posted about a lovely black cat who had nearly been euthanized not once but twice in a South Carolina shelter.   If you don't recall this post - go here to read about him.

Well long story short, Mom's friend Donna in North Carolina adopted him and it has taken all these long months but he is now letting her pet him and love him up. 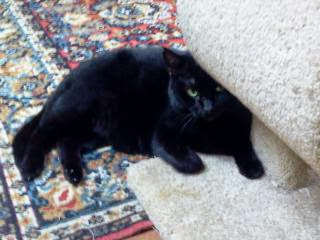 He had his own room for the longest time but her other cats could come in if she was there too. Donna made him some hidy places so he would feel safe but that she could reach under and pet him.  At first he only would let her pet him thru the blanket but eventually she could put her hand under the blanket and pet him directly.  Donna knows it takes lots of time, effort, patience and love to win over some cats.

Panther had been adopted out but was living outside again on his own with a group of feral cats when he was found.  He had a microchip and the lady who had originally rescued him was called.  She no longer worked with feral groups but tried hard to find the best home for him. One thing led to another and Brian's peep was involved.


We are just sooo happy to know that Panther is loved, appreciated and has a forever home indoor only with his Mom Donna and other kitty brothers and sisters.Give a shout out to Brian and all the other bloggers who work tirelessly to help find homes for abandoned dogs and cats!

Posted by wildcatwoods at 10:21 PM

Thanks so much for giving us an update on Panther. He wound up with just the right human!

It's so heartwarming to hear a formerly feral success story like that!

Oh I am so glad to hear that Panther is doing so well. That is very exciting. I always like to hear good news about Feral kitties. Now if I could just find some homes for some of the ones here. Take care and have a great week end.

What a terrific update! We're so glad Panther has a wonderful, understanding and patient human now!

Oh we are so glad to hear about the update and that Panther has a wonderful loving forever home.

We're so happy that Panther has a loving home and may we say thank you to everyone who worked so hard for this to happen.
Luv Hannah and Lucy xx xx

We are so thankful for everyone who worked so hard for Panther. And we are overjoyed that he is doing so well in his forever home.

Its so nice to get a happy update on the sweet Panther. I also say thanks to all who help save the pets. Hugs GJ x

I can't begin to tell you how happy that makes us. Way to go Panther, we knew you deserved a happy!

I am very happy that life has turned out well for Panther in his new home.

We are so happy to hear that sweet Panther is doing so well. He is looking great! Hugs and nose kisses

Thanks for the update on Panther, we remember the post about him. Donna is a star to work so hard with him and turn him around, but any cat would be a fool not to know when he is on to a very good thing.

I remember Panther and so glad to hear he was saved and has this great home now!!! I go to Brain's blog every time they post! I hvae two cats that look a lot like Brain. We love Brain and his blog!!!

It made us here so happy that Panther found a home and ate with people who are so living. Thanks for coming over to out blog and for your kindness when our own kitty Megat went to the bridge. We are sorry it has taken some days for us to thank you.

What a beautiful sleek panther Panther is :-) We are so glad he has a safe and loving home now!!

Awww, what a lucky Panther he is! You've got some terrific friends.

We know how hard Terry and many others work to find homes for kitties. We are so grateful for all their hard work. What a great story about Donna and Panther. Purrs and hugs, Lily Olivia, Mauricio, Misty May, Giulietta, Fiona, Astrid, Lisbeth and Calista Jo