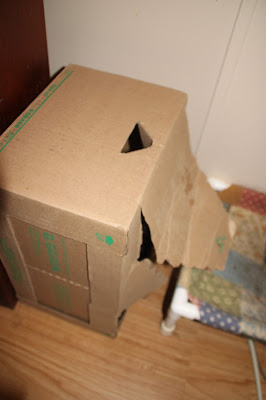 
If we can't find Minnie - we now know where to look for her!!!
Posted by wildcatwoods at 9:58 PM

MOL Minnie had a good hidey hole there, didnt' she?

Don't be so sure. Whenever one of our humans discovers a hidey spot, we usually find a new one. Hope Minnie doesn't do this to you. Purrs and hugs, Lily Olivia, Mauridio, Misty May, Giulietta, Fiona, Astrid, Lisbeth and Calista Jo

You know where to look, but only until she changes her sleeping spot, MOL. If she's anything like my cats, that will be tomorrow!

Minnie, that is one terrific place to hide. Aren't you the sneaky one. But glad you were discovered. Hope all of you have a great day.

Were you pretending you didn't know you were being called Minnie?
Luv Hannah and Lucy xx xx

Always check the boxes first. Looks like a great place for a nap.

cats are so darned clever, aren't they?

That is one cheeky place to hide Minnie!

minnie...de jig iz up...yur gonna hafta findz another hidin spot N mite we offer this peace oh advise...bee for ewe hide next time...leeves a note that reeds ...on vacation....be back in 5....they willna noe in ewe meen 5 minits ore half an hour ore may bee even 3 !!!

Gonna have to look for a new hidey hole Minnie.

Purrfect hidingspot you found there , Minnie :)

Wow, now THAT is the last place they would look, right Minnie? You are SO clever! :)

Minnie your new hiding spot has been uncovered.

That was sure a great hidey place...for a while!

Minnie, your secret hiding spot has been found. You'll need to find another one now. RATS!

nice hidey spot, Minnie! now next time be sure to hide somewhere different ;)

Ah the box. the irresistible box. One of our favorites, too!

Minnie, you pretty girl, you remind mom of Robin, the family's matriarch kitty from long ago.