Tabitha here.  Mom is trying to do "Stuff on My Cat" again!

Today is National Rubber Ducky Day! (It is also Friday the 13th but we prefer to celebrate something more fun instead!) 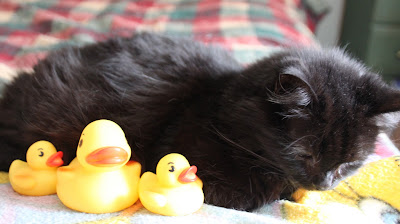 Sweetpea is pretending nothing is there - maybe they will go away!
It all began in 1970 when Jim Henson performed the song “Rubber Duckie” as Ernie on Sesame Street. The rubber duck bath toy has been an iconic American symbol ever since. Rubber ducks have been around since the rise of the rubber industry in the late 1800s, but no one knows their exact origin. 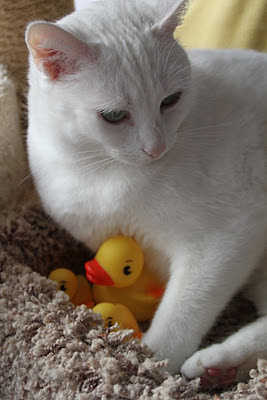 Two Spot thought he could nest with the duckies! 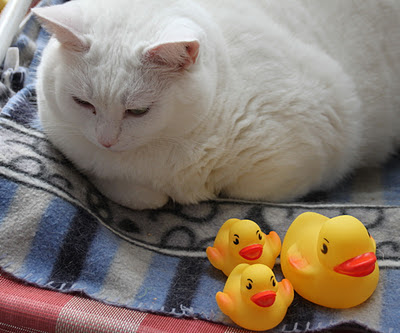 Snowball backed up to keep his distance!
Did you know that in January of 1992, a shipment of 29,000 rubber duckies fell off a cargo ship in the Pacific Ocean? By 2007, the “Friendly Floatees” had traveled 17,000 miles around the world on the ocean currents. Some are still afloat today! Over the years, people reported sightings in Indonesia, Australia, South America, the Bering Straight, the Arctic, and (eventually) the Atlantic Ocean. (Info from Punchbowl.com)


Do you or your beans  have any rubber duckies?  Enjoy Ernie of Sesame Street singing "Rubber Ducky" in the clip below.  Happy Rubber Ducky Day!


If you can't see this on here then go to YouTube here.
Posted by wildcatwoods at 9:11 PM

We never knew there was a Rubber Ducky Day! We don't have any rubber duckies...mom has some soaps shaped like duckies...does that count??

Oh this got me thinking: now where are my dogs' duckies? I'm sure they were too pawed out and drooly bitten that I must have thrown it! So now they can't celebrate the Ducky Day! ;-)

I love the rubber ducky...

Rubber Duckie Day! Yeah! That is just wonderful! We's has lots of rubber duckies! Mommy has a key ring, we has a pink one with white spots, a green one and Mommy bridged one home from a business trip that she gots in her hotel bathtub! me has been know to bat the ones that sit on the side of the tub.
Kisses
Nellie

I learned something new, I had no idea there was a National Rubber Ducky Day!

My human like the Devil Duckies you can get at mcphee.com. But then, she also likes Friday the 13th.

MOL, our mummy cat sometimes piles stuff on us too. We think it's because she's not too bright and easily bored.

We love your ducks!

We do not have any rubber duckies. But they do look like a lot of fun. Happy Rubber Ducky day to you too. Cute pictures. Take care.

That is so funny and I never heard of rubber duck day but its a much better day than Friday the 13th... Hugs GJ xx

Happy Ducky Day to you all! And thanks so much for these adorable pictures, you are so cute with the little yellow friends there! :)
Happy weekend dear friends,
Luna

We never knew about Rubber Ducky Day either. Mom has a cute devil Ducky!

We'd never heard of rubber ducky day and we must admit we LOL when we read it.
Luv Hannah and Lucy xx xx
BTW our word verification is
REQUAK!!

Beautiful pics!!! Darn, I hate it that I missed this special ducky day!

The woman tried to respond to your question about advertising but she keeps getting a weird error message but the second time it looked like it might have gone through--if it doesn't come through send us another note and we'll keep trying.

too cute....the small town where our grandpa growed up has rubber duck races in the summer!!

We doesn't haf any rubber duckies, but our human thinks celebrating them is better than any Friday the 13th. I wonder if rubber duckies are fun to play wif?

What a happy post!
It truly made us smile.
How could you not smile over yellow rubber duckies?
Nope we don't have any in our house but fromthe looks of it we should.
:)

Andrea and the Celestial Kitties said...

Oh my gosh! I had no idea and I had to text my niece immediately because she LOVES rubber duckies! (she's 21)
So Happy Rubber Duckie day to you!

LOL!!Awwww HAPPY RUBBER DUCKIE DAY to all of you!! LOL!! Awwww me and Charlie adore Ernie singing about his rubber duckie too - such wonderful memories!! Thank you!! Take care
x

Which are cuter, the duckies or the kitties? Boy, it was a tough call, hehe!

YAY for Rubber Duckies!!!!!!!! We love them and we love the Sesame Street Song!! Thank you for giving us the history behind them, we never knew that!

Thanks for the comment on my blog and the offer to assist with advice with TNR. I'm sure I will be taking you up on that offer as I am totally new to this TNR thing. I successfully trapped Oliver, an abandoned stray that showed up a year ago. He's turned into a super lovey, wonderful cat. Not too long ago, he brought over his family (two kittens and their mama) that I need to trap soon and get then fixed up.

The local amazing cat-only shelter is hosting a how to trap a cat class this weekend, I'm hoping to learn a lot there!

I look forward to visiting Cats of Wildcat Woods more! Meanwhile, I had go better tend to my flock of rubber duckies...

Rubber Ducky Day is much better than Friday the 13th. I like your attitude and love the pictures.

Rubber Duckie Day how cool is that.

Love the tidbit on rubber duckies..interesting.

GREAT post in honor of the rubber ducky!! Too funny,
Hugs madi

We did not know there was a Rubber Ducky Day! We'll have to go find ours, and dust them off for next year! :)

Dear friend
Thank you SO much for your comforting words on God's Little People this week. Lilly will for sure always be with me. I was surprised to discover (when I came to think about my time with her) that I actually only had her for 14 weeks (it's painful even writing this) but it felt like I'd had her in my life forever. She had a very short life but it for sure was one full of love. She made me realize just how much love my heart can encompass and it is limitless!
xo
Joan