Bats, cats , spiders and pumpkins..Halloween is filled with scary things..so how about one more scary story to top off our week long Halloween celebration? 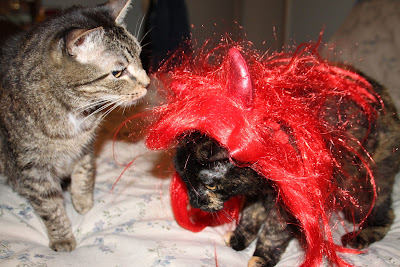 Chica here, in my She-Devil outfit trying to lure Joey into my deadly clutches.  I will do the honors of the tale today!

You have all heard of shapeshifters - witches who were believed to be able to shift their shape into that of an animal, usually of a cat, to carry out their evil deeds.  Well...at the Tomb of Lady Ann Smith of Edmondthorpe, Leicesterhire, who died in 1652, her statue bears a strange red stain on its wrist.  Tradition says she was a witch who turned herself into a huge black cat. One night her butler struck a black cat on the paw with a cleaver. It vanished but the next day, Lady Ann displayed a wounded wrist.  The cat's bloodstains remained on the kitchen floor until 1920 when the flagstones were taken up. In her tomb, Lady Ann's wrist mysteriously bleeds under the right circumstances!


Seventeenth century Scottish witch  Isabel Gowdie revealed the magic formula  she used to turn herself into a cat which was to repeat this verse:


"I shall go intill an catt,
With sorrow, and sych, and a blak shott;
And I sall goe in the Divellis nam,
Ay will I come hom againe."

Be careful out there on this night when the veils are thin between worlds!  And watch out for black cats...it could be someone you know!!!  Happy Halloween from all of us!
Posted by wildcatwoods at 9:54 PM

Yikes, that is a scary story! Too bad some people think such bad things about black cats. :(

We, of course, LOVE black cats (and all other cats, for that matter).

Aww, we think you kittehz are all too cute to be skeery! But that was a skeery story. Thanks fur the Halloween treat!

Oh if we could do that we'd raid the fridge in the dark!!!

hmmmm, at our house, we think the Whitesters are the evillist ones!

Mommy says she want to be a cat...she might try that spell!

Spooky - We has never heard that story before.

OH MY! That was a really scary, scary story! I won't be able to sleeps tonight!

Chica! We loves your red hairs!!

Ugh, that's frightening - the thought that humans could possibly disguise themselves as one of us kitties! I really hope that is a made-up story. The last thing I'd want to do is be punk'd by some tricky human!

Ooooooh how scary and spooky and just plain ghostly!! Yowza!! Aww but Chica is just lovely and big hello to Georgie and Joey!!

Very skeeeeeery.... I love your post. We will be careful all day..... Happy Halloween to you.

Yikes, that is all really scary. Hope all of you have a super Halloween. Don't let the goblins get you. Take care.

We wish you a happy and safe All Hallow's Eve!

How strange you should choose to take of Lady Anne Smith of Edmondthorpe, Leicestershire - we only live about 25 miles away. We have never been there but we don't think we'll go today as she might be a ghost at Holloween!

thank you for all of the spookiness!!!

Wishing you a safe and happy Halloween!

Y'all look great and I hope you have a treat-fillen Halloween!!!

Very scary stuff. I hate that people dont like black cats. But then we love all cats.. Happy Halloween.. Hugs GJ xx

Happy Halloween to all of you!!

Oooooo we is furry skairt!!!
Have a fun and safe Halloween.
purrs
>^,,^<
♥Abby♥Boo♥Ping♥Jinx♥Grace♥

That sure was a scary story !
Happy Hallowwen :)

Chica has us trembling in our booties! Great post. We have looked back through your Halloween week posts and loved them. Your Mom's costume was excellent. Great job kitties. (We also found your National Feral Cat Day post excellent.) Happy Halloween!

You all look great! I hope you had a fun day!

Ooooh, scary story. But even though I am a black cat, I am just me. I think.

Now that was a scary story...shape shifters...Mom says I might have been one during my first year here.
Evidently I was a hand full.
MOL
Madi

Oooo that was the purrfect scary story! Thanks for visiting me and the birthday wishes. We've enjoyed your Halloween posts and hope to see you around!
Purrs, Mica Minnie Moo
PS There is sposed to be a local scary story about Black Aggie. I'm not sure what the story is, but I'm sure it will come up if you Google it. Maybe a tip for next year?

That was a really spooky story. I hope you had a great Halloween. Happy Gotcha Day, Snowball!

The mom screwed it up. There were 2 entries she forgot to put up- for the lamest costume and the most resistance to wearing a costume. please come back and vote in those two categories again, polls are open until 12 am november 4th.

I live in Edmondthorpe 2 houses up from the church and what is really bizarre is that on Halloween, a friend and I came back from the shops as it was starting to get dark and there in our drive was a black cat. On closer inspection this black cat was different; it had mange , was wild but yet had enough about it to allow us to walk up to it, but must strangely on closer inspection its eyes were completely black... It didn't act like a normal cat either as when we tried to get even closer it started whining at us very angrily. We stood back and the cat calmly from left to right walked past us out the drive. end if story but no. Later that evening, being smokers, we went outside into ye garden to have a cigarette and there staring at us was this same black cat only this time just observing. This time when getting closer it scurried off only to then be heard in the early hours of the morning whining again but this time not to be seen. Since this night, we haven't seen it since only thought we'd check the Internet to discover the story about lady Ann smith... Deafinately spooky.