We just adopted a new Angel VSquillion in memory of our beloved Manny.

Manny was Mamacita's baby and Rosa's brother. He was only 2 1/2 when he went to the Bridge. He had a UTI and got a blocked urethra before Mom could help him and the vet accidentally tore his urethra putting the catheter in - it is a hard procedure to do and he was young and fairly new as a vet. He wanted to do surgery to correct this but he was slammed that day and had to wait until morning to do it. Manny died overnight before the vet could do surgery. Mom had brought him home in case this happened so he was with all of us when he went to the Bridge. Mom is still very sad that this happened. 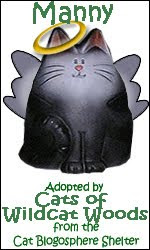 Manny and Rosa were very sick kitties when Mom trapped them and brought them inside. Manny is the one on the right in this early photo. He loved to chase after the red dot from the laser toy and would growl at anyone who messed with him while he was playing with it. He was so sweet otherwise - only the laser toy brought out this side of him! He was very shy but loved his momcat Mamacita and followed her everywhere. We miss you so much Manny and think of you every day! 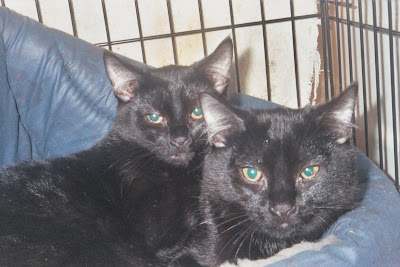 Don't forget to stop by on Wed. the 17th for the big St Pat's/Darby Gotcha Day celebration! Everything will be green...it should be cool. Mom is still feeling poorly so bear with us while we try to catch up - we still need to pick up some awards and post them! She is getting so behind - we may need to hire a substitute to replace her if we want to keep up to date with our blogging!
Posted by wildcatwoods at 1:13 PM

We're so sorry about Manny. The angel vsquillions are a wonderful way to remember those who have passed.

awww Manny is beautiful. I hope he meets my kitty Snowman over the rainbow bridge.

We will be here on Wed. :) Can't wait. Please ask your mom to take care. My kitties are sending lots of purrs to your mom :).

Sorry to hear about Manny. What a nice tribute to him. We will stop by on St. Patty's Day.

That is so sad. I am so sorry this happened to him.

That is so sad about Manny. We're sure he'd appreciate the squillion in his memory. That's such a nice tribute.

That is very sad about Manny. The vSquillion is a wonderful tribute.os

Manny was gorgeous; that is such a sad story, but your Squillion is a sweet tribute to that beautiful boy!...xo...Calle, Halle, Sukki

Oh, that is so sad about Manny. I'm sorry for your loss. We always insist on seeing one certain vet at our vet's office because we have confidence in him. Sometimes we feel awkward asking for him even though we love all the drs there...he is the best. They are our babies and we have learned the hard way not to compromise anymore.
~Lisa Co9T

When Manny got sick, it was an emergency during a blizzard over the New Year's holidays and this vet, who we knew but was not our vet, was the only one available immediately. I guess Manny was not supposed to be with us any longer either way - if we waited he would not have made it and yet he didn't when we got treatment. I feel that pets have their predetermined life times as with us. When it is their time, it is their time.

Oh what a wonderful VSquillion for darling little Manny!

What an awful story! Poor, poor Manny - I'm so horrified by what happened to him! :-(

I'm just so glad he found his home with you lovely people!

I'll be sure to check out the St Patrick's celebrations!

I also hope you feel better too.

What a nice way to remember Manny. It's so sad that some have to go to the Bridge so soon.

God bless sweet, Manny. Although he was taken to soon, he had a wonderful home for the short time he was on Earth. Until you see each other again. Purrs and hugs.