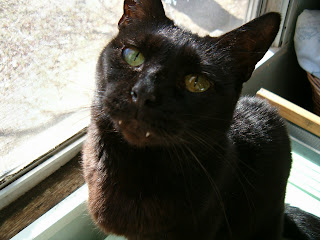 Minnie is one of my favorites if I can say I have favorites!

One of a feral litter of three black cats and one tabby,  (Joey, Leroy, who disappeared at age 6 months and Nick who went to the Bridge in 2006) she was born late fall in an old abandoned travel trailer on our neighbor's property. As kittens they all showed up in January coming out from under the trailer on sunny warmer days. I was worried they would not survive the winter but they did.

Minnie was named because she and Nick (originally named Micky) had huge ears like Minnie and Micky Mouse. Nick's name was changed after we TNR'd him and the vet nicked his ear so we would know he had been captured already. Minnie responded to her name and actually came when I called her, even while living outside. 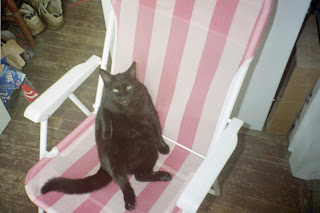 Minnie lived outdoors for a few months with her family until Ivy  ran her off when Minnie reached maturity. I guess she was a threat to Ivy. Poor Minnie lived across the street behind the old general store and only came by for food when none of the other cats were around. She looked so pathetic sitting on the edge of the road just staring over at our house. I talked to her and petted her when she did come over but was worried she would not survive on her own or be hit by a car on a busy street.

One one particular day she was sitting out there looking pretty forlorn and my husband and I just opened the front door and called to Minnie. She came running and came right inside! That was eight years ago and she has made herself at home with us ever since.

She is a tiny slim cat only weighing 7 pounds and has velvety fur and the most beautiful shade of green eyes. Minnie gets herself into unusual predicaments. Because she is so slim she would get between the screen and glass in the porch windows when we slid them open. I didn't want her to get stuck there but she would slowly back out and be free.


Minnie is very talkative and has a funny voice - raspy and scratchy. She lets you know what is going on and who is doing what. Most of her teeth are missing (from inbreeding in her colony probably) but two very large fangs are visible even with her mouth closed, giving her a vampire look!

She has IBS and had diarrhea since a kitten but as she got older and with better food that seemed to even off and she actually put on weight and had normal bowel movements. At about ten years old now, she is having constipation problems. I worry she could develop more severe bowel issues with her history of IBS.

We love her dearly and hope that she will be with us for a long time to come.
Posted by wildcatwoods at 10:23 AM

Hi Minnie! It's nice to meet you! We think your teeths are kinda cute!

Nice to meet you Minnie. Mamma loves you teeth , we do too. We also think it is cool that you are a talkative cat.

Hello Minnie, thank you for sharing your story. You are beautiful and we also love your stylish fangs.

Hi Minnie,
Nice to meet you. Your fangs remind us of another cat we knew. He was a gorgeous cat. We think you are sweet and glad you have a good home.
Purrs,
the Team