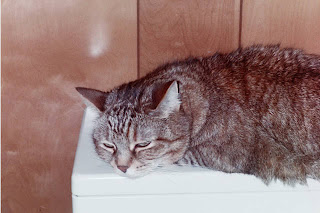 Little by little I am working down the list of cats to give you an insider's view to each of their lives.

Yoko, named because of her unique singing voice, was supposed to be a puppy! For Mother's Day 16 years ago my husband took me to the shelter to pick out a puppy. We already had Chica and thought another pet would be good for her. Of course on that day we visited, the shelter had NO puppies or even young dogs. So we wandered over to the cat section where a staff member was cleaning cages. She handed my husband a tiny tabby. It was love at first sight for those two...and this was supposed to be my gift.

Long story short, we took the tabby home, naming her Yoko. She was a very curious feisty little girl. But, Chica hated her...I am sure Chica wanted to be the only cat in the household and was completely insulted we brought Yoko home.

We kept the two cats separated from each other with a glass door between them. Chica watched as Yoko played and ran around in her room while growling at her the whole time. Finally, after a week or two of this, I noticed Chica playing with Yoko on her side of the glass - a good sign. Time to try to introduce them. With supervision, they finally tolerated each other. Although Yoko learned to find high or really obscure hiding places to get away from Chica and have some quiet time.

Chica would just look at Yoko and that would be enough to send Yoko off to one of her hiding places. Not the best situation but we gave Yoko lots of love and attention to make up for Chica's coldness.

As we added cats to the household, Yoko got more and more relaxed. The sheer numbers made Chica less focused on her. Still other cats would single her out as easily intimidated. The only one that Yoko would fuss at was me. Maybe she was still mad at me for bringing her to live with Chica. She growls and hisses at me for the least little thing but when my husband comes to the rescue, Yoko is a sweet little dear who would never behave like that. She is truly "Daddy's little girl".
Posted by wildcatwoods at 12:38 PM

Awww! We enjoyed reading the story of Yoko. She reminds us a lot of Chevelle who is easiest to intimidate in our house.

Yoko knows that there's safety in numbers and Daddies! She's a sweetheart.

We liked reading about Daddy's girl - Yoko. Very amused that the puppy turned out to be a kitten - for dad, and on Mother's Day! Love it, thanks for sharing.

I just read Yoko's story and Chica's too! Oh what lovely superb cats. I like that you named Yoko because of her singing voice! And my heart just melted after reading the bit about Chica's illness and how she's doing ok now for an 18 year old kitty gal! Bless their little furry hearts.

These are absolutely lovely pics of Yoko - she is one stunning tabby.