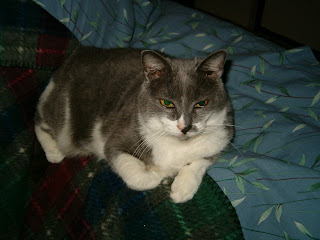 I thought I would tell a bit about each of my cats and how we found each other.

Darby was living under our rental house as a kitten. Our neighbors at the time move to Florida for the winter so we have no idea where she came from. Only a few people live here year round. I noticed her going across the street to eat outside another house who has cats. I asked them if she was a new addition and they told me she came from under our house!

Darby was very wild and would not let me get near her. It was cold and snowy so I made a covered cage for her on the porch to protect her from the cold. She would go inside during the day but spent her nights under the house. It seems she had a roommate...a possum would come out at night and feed from the bird feeder in the yard and then go back to the crawlspace and Darby would come out during the day! I was worried the possum would hurt her but they seemed to get along, coming and going on their own hours.

Other cats would come by to steal her food but Darby would chase them off even as a tiny kitten. I thought she was a male for all her bravado.

I waited until Darby was using her cage which was a dog kennel cage and then I began to plot her capture. I moved the cage closer to the front door little by little until it was in front of the door. I had started to put her food inside the cage so she would be busy eating. I tied a string to the cage door and ran it through the door to the house making sure I could pull it and shut the cage door quickly and quietly. I have used this method many many times.

This was the day. My other three cats Chica, Yoko and Sweetpea were lined up inside the glass door of the house watching this all unfold. Darby went inside the cage and I pulled the string. Got her! She fought and wailed and put up a fuss. I picked up the cage and brought it inside. Now to tame her...a long time consuming challenge. To be continued.
Posted by wildcatwoods at 12:56 PM

Great job on the trapping!!
Darby is a cutie!

Hi Darby! We're glad that you were caught even though you might not have liked it at first...but you are much better being an inside cat!

Oh what a fighter!!!

Yay for Darby and so glad she found you for her forever home...!

Yay! You caught Darby! I admire your patience and method.
~Lisa Co9T

So glad you were able to catch Darby.