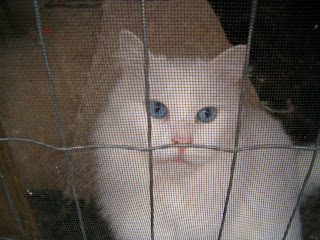 Albert, my dear deaf cat, is acting up again...being a bully to the other cats. We moved him in with the other white cats since he seemed to get along with them best. But...two tabbies are in there with him - Tabitha and Woody - and Al is focusing on them now.

I think it is mostly him not relating to other cats and not knowing how to play with them. I even spoke to an animal communicator and she said Al has such weird thoughts in his head about everything. He would not talk to her. She said he wants to do everything his way.

He has better days than others so hopefully this phase will pass. Tabitha works around him and stays away from him. Woody only comes out when Al sleeps. Not the best situation but the cats seem to be adjusting.

Lately Al has been sitting just inside the interior glass door looking out the door. Unfortunately this is where the cat door is to get inside. Most of the others will go in anyway but some see Al and won't go past him. We have made a few snug warm cubby holes for the ones left outside in the covered porch to be comfy for the night if they won't go inside. Let's hope he simmers down soon this time.
Posted by wildcatwoods at 11:51 AM

Wow! Al sure is a handsome mancat! Maybe the bullying is a phase that will pass soon.